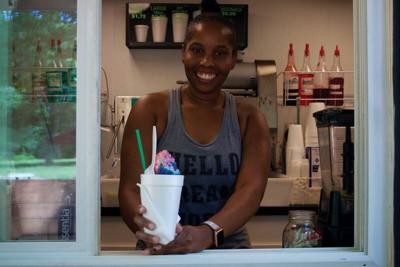 Amid the sweeping Black Lives Matter movement, many Americans are left wondering, how can they stand in solidarity with and better serve the black community?

Still on the cusp of the COVID-19 pandemic, many may have reserves about attending a crowded protest, but a simple way that many are calling to action is being conscious of where your money is being spent in order to support inclusivity on a larger scale.

Black and minority-owned businesses already face higher vulnerability and risk than normal businesses, the recent COVID-19 pandemic has only further exasperated that strain. It’s no secret that minority-owned small businesses have been the most effected, many having to close their doors permanently.

For Lewis, Escape Photography is a side business to her full time career as a volunteer coordinator at a child advocacy center in Conroe, helping make ends meet.

“I see it as an opportunity for me to create more wealth and create more income for me and my family,” Lewis said.

Starting up her business in her last year of school in 2018, Lewis started off shooting graduation photos of her friends and portraits of her family members, slowly expanding to stylized photo shoots, weddings and kids portraits.

“Some of my closest friends are black, so they, or my family, were the first people that I photographed,” Lewis said.

The support from the black community was integral in helping Lewis build her business from the start, however broadening her audience outside of that community was a challenge.

“I would say for the photography business, especially being here in Huntsville where you see a black community or you see a black population, but it’s predominantly not black, just getting a start here in Huntsville was a little difficult,” Lewis said. “People like to see themselves reflected in images, on TV, so because I am black and because I photograph black families and black friends, it was really hard to get support from people who were not black because they wanted to see themselves reflected.”

“Be consistent with showing up, or if you don’t want to show up, then just get on social media, blast it, say good things about it,” Vanessa Irving said.

Typically, this time of year would be a busy season for Lewis, however in the after effects of COVID-19, photographers are facing fewer and fewer bookings if any at all.

However, Lewis has recently been able to book a few new appointments and received more page likes from being boosted by the community in online threads listing local black-owned businesses to support.

Supporting these businesses helps close the racial wealth gap stemming back to Jim-Crow-era laws segregating African Americans from higher-paying jobs and homeownership opportunities that prevented wealth building over preceding generations. Supporting black-owned businesses gives the owners capital to hire employees, thereby creating jobs for those in the community, and helps boost the appeal to potential investors.

“When you support minority businesses I think the community grows, the economy grows a lot better … there’s quite a few of us out there, so I believe it’s good to help the working man, the man that wants to go out there and make an honest day’s living,” Oliphant Lawn and Stump Grinding owner Jay Oliphant said.

Most minority owned businesses have found it difficult, if not impossible, to acquire bank loans to expand, remodel or even open their businesses. A clear picture of this is seen at 3 Sistas Kitchen, currently located in the Zipp Zapp gas station on 11th Street and MLK. The owner, Joyce Ratcliff, is looking to expand her restaurant into a larger space, however without financial investors and limited capital, she has found it to be difficult finding a new space that is affordable.

“This is where economic development in any city plays an important role in leveling the playing field,” Huntsville City Councilmember Dee Howard Mullins said.

3 Sistas Kitchen, founded jointly by Ratcliff and her sisters, Janice Russell and Carolyn Lewis, is located near the East End area, a historic area for black businesses according to Howard Mullins. Rogersville – located in the 10th street and Samuel W. Houston Cultural Center area – and The Drag – the area surrounding the historic Cox Funeral Home and City Hall – are also noted by Howard Mullins as being traditionally predominantly black-owned business areas of Huntsville.

“I grew up going to these businesses for most of my family needs – a large majority of white businesses did not want our business. There were also neighborhood stores that operated out of individuals’ homes – they were the forerunner to the Dollar Store. These are my fondest childhood memories,” Howard Mullins said.

Accompanied by her grandchildren learning to make their own hamburger and watching their grandmother work, Ratcliff inspires them to dream big and to see the potential in themselves of being their own business owner or chef.

As the oldest in her family, Ratcliff works tirelessly to build the family restaurant into an umbrella that has the potential to secure her family’s future generations under.

“My son loves to cook, I have a nephew that loves to cook, so hopefully it will pass down even if I’m gone, they’ll still be taking the name 3 Sistas,” Ratcliff said.

“Minority businesses traditionally are smaller and generational transfers. Historically, Huntsville has always had a robust small business, black-owned community,” Howard Mullins said, estimating there to be about 20 black-owned businesses in Huntsville today.

Despite growing up in her parents’ small business, Irving never saw herself becoming a business owner. Growing up seeing the struggles that her parents went through owning U Rent Em, Irving dreamt of being an elementary school teacher until God put it in her heart to open a snow cone stand.

Six years later, she now has two locations with two more mobile trucks in the works.

“I’m not a quitter, so I had to find a way to make it work, keep going, put it together and be different,” Irving said.

Huntsville High School basketball coach Jay Oliphant notes seeing the same reluctance in his students to start their own businesses, especially not ones that involve manual labor outside in the heat.

Oliphant has been coaching kids at the high school for 17 years, 11 of which he has served as the head basketball coach. During that time, Oliphant started his own yard service 15 years ago to pass the spring weekends and summers off from school.

“At a young age, I’ve just always loved making money, and it was just an avenue for me to make some money at the time, it wasn’t very expensive to get into, so I started mowing lawns. At the time, it started off as just a few yards, but over time it grew into an avenue of a small business,” Oliphant said.

Many of his students know that he owns his own yard business, a few even seek him out for employment from time to time.

“A lot of times I invest in kids to give them an opportunity to make a little money,” Oliphant said. “It builds character in kids and I think the reward of a hard day’s work is big for a life lesson.

“Being a minority, it is real big for the minority kids that come through to show that you can get an education and do what you want to do, have your own business and be successful. Hopefully that kind of goes to them and gives them some information to do the same thing.”

Study after study shows that support for minority-owned businesses shows a greater benefit to the stabilization of local economies for years to come.

The Huntsville Chamber of Commerce, under the leadership of Ray Hernandez, has been actively recruiting minority businesses for membership and to make them aware of the various resources the Chamber offers. SHSU’s Small Business Development Center also provides training and resources for local business owners.